My Thoughts & Testimony on the Police Reform Bill 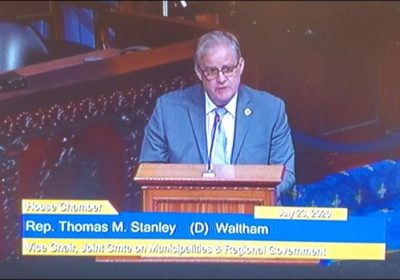 The legislature this week is working on the Police Reform Bill (H4860.) As with all comprehensive legislation, it has created much discussion and debate on all sides of the issues being addressed. It has also created some confusion, rumor and misinformation being circulated. So I wanted to personally update you on my perspectives and actions.

As expected, many groups and organizations contacted my office about H4860. I have reached out to our local public safety stakeholders to discuss this bill. But, I also wanted to hear directly from my constituents in Waltham and Lincoln and asked them for their opinions. I want to thank the many hundreds of individuals who took the time to respond by mail and on-line. Their perspectives and thoughts have been helpful.

I want to share with you my position as reflected in this statement:

“What has transpired nationally has drawn all of our attention to the urgent and overdue need for change in our country. We have an opportunity to create a truly comprehensive reform bill if we bring all stakeholders to the table to construct it.

“I thank you for the opportunity to speak on this important legislation. I share a desire to Reform Policing in our Commonwealth, to make needed changes in policies and regulations that respond to the times we live in, remedy unacceptable policies of the past, address systemic racism and set better structures for the future. This requires major systemic changes.

“We can all agree on the goals we want this legislation to attain: to ensure our local and state police will be decent people, well trained and loyal to the oath they take and citizens they serve. We are grateful that the overwhelming percentage of police in our state meet these standards. We want to ensure that police who fail to meet standards will be held accountable and removed.

“Many reforms and practices already conducted by our police we can all agree should be codified into law. We share a determination to ban choke holds except when police officers lives are in danger, to ban the use of chemical agents like tear gas except in limited cases such as use in barricaded hostage situations, and to restrict the use of no-knock warrants unless approved by a judged to preserve life safety.

“We want to require police to intervene when one officer observes the misconduct of another. We want to stop police who fail to meet standards in one department from moving to another. And we want to make needed changes in State Police governance. Yet, there are many facets of this proposed Reform Bill that remain ambiguous, unclear and disputable.

“I offered amendment 177 because language in the proposed House bill was unclear relative to defining the term “unprofessional conduct”. We should not leave that for experts to define later. We should listen to them now to determine the definition before passing broad based changes.

“Having been here 20 years I have learned that Reform legislation of this magnitude can only succeed to achieve the goals desired when all stakeholders come together to reach effective, responsible, fair and equitable legislative solution. The language contained in the legislation must be specific and well defined leaving little room for guessing its intent. Legislators must be presented all data available and hear all voices from each stakeholder group affected.

“Qualified immunity is a doctrine created by the Supreme Court in large part to protect public servants from frivolous lawsuits. It was only two weeks ago at 4am in the morning when we learned that the issue of Qualified Immunity was the priority of Police Reform. We then learned that the language approved by the Senate would also affect teachers, firefighters, school nurses and all other public employees. We also learned that law enforcement has grave concerns as to the affect Qualified Immunity language changes would have on policing and keeping the public safe.

“In the case of this legislation before us, I believe we have not achieved that level of inclusion and consideration yet. Passing a major reform bill without this input will ultimately weaken public acceptance and that is not fair to all of those who want a comprehensive and effective law passed now.

And it is for that reason that I cannot vote for the final bill.”

I believe effective Police Reform can be achieved if we bring all stakeholders to the table to work on it together. I sincerely hope we will take this opportunity to do so now and in the future. As always, I welcome your thoughts and comments.

h J R
Rep. Tom Stanley @RepStanley Thank you Lisa for your support and continued commitment to seniors. Your outstanding advocacy for older adults is… https://t.co/P2GjF9rOeP