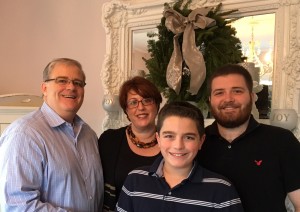 As a child, Tom’s father Bill lost his parents. After finishing school, he always worked two-three jobs, volunteered as coach, PTO President, CCD teacher and more while raising Tom and his four siblings. Tom’s mother Roberta waitressed at the Chateau for over 30 years, sold real estate and worked at Waltham Hospital for a time while volunteering for everything from cheer leader coach, shack mom, PTO President and many more. Along the way, Bill and Roberta made time to elect Bill city councillor, state representative and eventually mayor of Waltham.

Bill and Roberta instilled their work ethic and community involvement in Tom. Like many Waltham residents Tom always worked two-three jobs and volunteered in the community while earning three college degrees. A paper boy, dish washer and bus boy at the Chateau were some of Tom’s first jobs.

Like his father, Tom carried his work ethic into public service for Waltham. As state representative and city Councillor, Tom is one of Waltham’s hardest working elected officials. But his love for Waltham goes well beyond his public service roles. Tom’s volunteerism is extensive. Currently, Tom serves on the Warrendale Little League Board of Directors, the Waltham Partnership for Youth Board of Directors, the Waltham Family School Advisory Board and the Waltham Community Day Center (for Homeless) to name a few. Tom is also a member of the Lions Club, the Friends of the Waltham Family School and the Safe & Healthy Schools YRBS Steering Committee.

Tom is a lifelong resident of Waltham and proud homeowner. He lives happily with his wife Kim Bayliss, their two sons, Ryan (age 27) and Parker (age 18) and their rescue puppy Regan, a Catahoula Leopard Dog.