We need to think seriously about transportation and infrastructure impacts as part of local land use and sustainability efforts. Current traffic conditions in Waltham are unacceptable. Traveling in, out and across our city is a traffic nightmare at any given point on any given day. Running out to the local market can become a multi-hour excursion due to inadequate traffic light synchronization. Kids no longer safely play along neighborhood streets or walk themselves to their neighborhood schools because of excessive and reckless cut-through traffic. Residents feel trapped in their homes because pedestrians and vehicles cannot traverse our city streets safely and with ease and the local transit infrastructure is inadequate. Moreover, too many residents are forced to pay for repairs to their vehicles from damages due to the potholes and the poor condition of many Waltham roads. This is not acceptable. 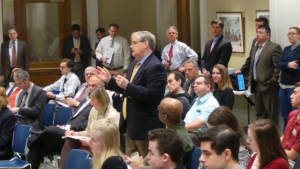 Working with state and local officials, as well as private sector leadership, Rep. Stanley works hard to help reduce traffic congestion, improve walkability on our city streets, make playing in the neighborhood and walking to school safer for children, and lessen the stress of daily commutes.

After Gov. Baker vetoed $156,000 for traffic signal upgrades intended for the installation a wireless coordination system for 39 identified traffic signals in the business district of Waltham, Rep. Stanley led the charge to restore this important appropriation.

This year, Rep Stanley and Rep. Lawn filed an amendment to the Economic Development Bill allocating $250,000 to qualified municipalities address their downtown parking demands.  Under the criteria, Waltham would be eligible to receive funds for the study and implementation of a parking management plan. 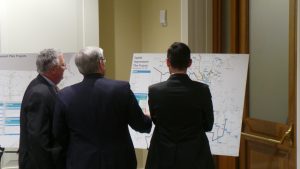 Traditionally, cities and towns seek to resolve parking issues by constructing new garages which often seem like a quick fix at the time.  However, to build a garage, communities need to make a major capital outlay for construction and then come up with continued funding for operations and maintenance.  Sometimes parking cover these expenses, but more often than not, they don’t.  In addition to the high costs of construction and maintenance, parking garages also use up valuable land in downtown areas that could otherwise put into productive, revenue-generating uses for the community.

Rep. Stanley and Rep. Lawn’s amendment will provide major job centers of the Commonwealth, municipalities seeing more than 30,000 daily visitors, with assistance to address downtown parking challenges.   According to the Department of Labor and Workforce Development’s latest published data set (2012), there are 15 communities across the Commonwealth, including Waltham, that host at least 30,000 jobs, meeting the criteria for this benefit as a major jobs center. 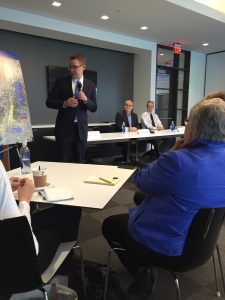 The 1265 Main Street Developer has been working with MassDOT, the City of Waltham and regional stakeholders to advance Phase II of the project.  However, the current roadway network is unable to support further development within the corridor without major multimodal infrastructure improvements.

These improvements include the reconstruction of the Rt. 117 Bridge over I-95, the construction of a Green Street Connector, and potential modifications to the I-95/Rt. 20 Interchange (both a Northbound On-Ramp from Main Street and Northbound Ramps to/from Third Avenue), an Internal Connection to CityPoint/Fifth Avenue and potentially a new train station on the Waltham-Weston border west of Rt. 128/I-95.

One of the major traffic improvements proposed is the replacement of the existing four-lane Rt. 117 Bridge with a seven-lane bridge, including sidewalks and dedicated lanes for bicycle travel. When finished the new bridge will help increase traffic capacity along the Rt. 117 corridor and permit means of travel for pedestrians and bicyclists.  Additionally, the direct connection to I-95/Rt. 128 at the Rt. 20 interchange via Green Street (Green Street Connector) will provide vehicles direct access Rt. to I-95/Route 128, while also moving highway-bound traffic away from the Tavern Square and Cedarwood neighborhoods. 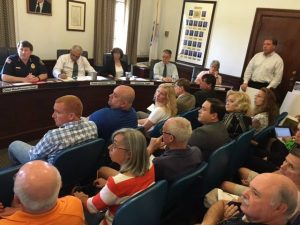 Plans for the construction of a new I-95/Route 128 northbound on-ramp to the east side of the Rt. 117 bridge will permit direct access from Rt. 117 to Rt. 128/I-95 North, eliminating unnecessary travel in and around the city street network to find access to and from Rt. 128/I-95 northbound through Totten Pond Road and Stow Street neighborhoods.

The Internal Connection at CityPoint/Fifth Avenue is another critical piece to reducing street traffic and one that can only be realized if the above proposals are approved and executed.  The proposed Internal Connection will run northerly from the 1265 Main site to Fifth Avenue and the CityPoint Development, providing an alternative point of connection between Rt. 117 to the south and Totten Pond Road to the north operating as a “relief valve” and allow traffic to directly access Rt. 117 and/or Winter Street, reducing trips on congested local roadways.