Rep. Stanley supports and protects public education through legislation and budget initiatives to reduce costs and increase revenue for the state’s public schools.  As state representative, Rep. Stanley had made protecting public education a priority and has fought to ensure Waltham and Lincoln receive a fair share of local aid through the annual state budget. He also closely reviews state mandates on both school districts for fairness. 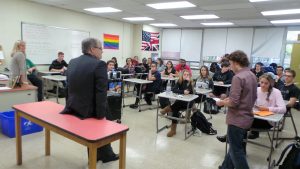 ·         Cosponsored Rep. Roger’s bill, HD4532, An Act Strengthening Public Education in the Commonwealth which implements the Foundation Budget Review Commission’s findings.  Rep. Stanley supported the creation of the Foundation Budget Review Commission in the FY15 state budget a couple of years ago and advocated the House to pass HD4532 this session.  Under this legislation, the most recent statistics show that Waltham’s Foundation Budget would increase by $2M, triggering an immediate infusion of $540,272 from the state into Waltham’s Chapter 70 local aid award. 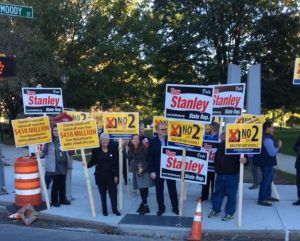 HD4532 is a very important piece of legislation, but it is not the only education funding proposal Rep. Stanley has supported.  Here are some other bills and budget initiatives for which he advocated which would benefit public education:

·         Co-sponsored H.472, An Act expanding the special education reimbursement program, which would allow transportation costs to be factored into the Special Education Circuit Breaker.  Waltham would see an increase in Circuit Breaker aid under the bill.

·         Co-signed a bi-partisan letter to state budget leaders calling for an increase in minimum aid from the current level of $20 per pupil up to $50 per pupil for the upcoming fiscal year.  On a statewide basis, the request would add about $20 million to the entire Chapter 70 line item, $106,311 of which would go to Waltham if the $50 per pupil target is met. 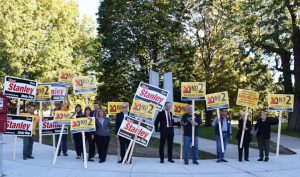 ·         H.376, An Act concerning unfunded education mandates, which creates a task force, similar to H.456, but also establishes a moratorium on all new mandated education programs until the task force completes its recommendations.

·         H.3391/S.322, An Act related to unfunded mandates on public schools, which would require the Department of Elementary and Secondary Education (DESE) to conduct an analysis of all new state laws, regulations, or administrative directives to assess their impact on school districts. 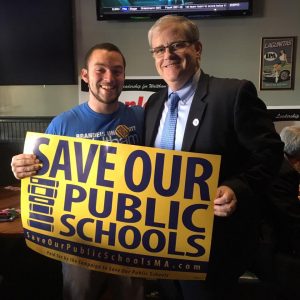 ·         Testified against H.3928, An Act to allow fair access to public charter schools, at the Public Education hearing on Monday, March 7, 2016.  This initiative petition would allow the authorization of up to 12 new charter schools every year.  Charter schools divert funding from public schools.  Raising the cap will drain limited financial resources public schools desperately need.

Over the past several years, Rep. Stanley led the effort to create a new line item in the state budget to reimburse municipalities for homeless student transportation costs related to the federal McKinney-Vento Act.  Although this funding has only been partially funded due to budget cuts, Rep. Stanley has continued to push for full funding and made DESE’s FY17 McKinney-Vento estimate of $24,312,389 one of his FY17 budget priorities.

Rep. Stanley also made increased state aid to school districts serving non-Gateway Communities with high populations of English Language Learners another of his FY17 budget priorities. The Waltham Public School system has experienced a dramatic increase in the enrollment of ELL students over the past several years (60% since 2011-12).  Waltham High School, in particular, has seen a nearly 100% increase in ELL students since 2011.  As you know, many of these students arrive at school with little to no formal education for WHS to build upon.  WHS has very little time to close the learning gap, requiring costly staff-intensive interventions with support staff to meet this challenge.  Overall, this remarkable influx of ELL students has put a severe strain on the school system’s resources.

Rep. Stanley urged the House Ways and Means Committee to include the Foundation Budget Review Commission recommendations regarding ELL students into the House FY17 budget proposal.  Funding is not only needed for operational expenses to educate ELL students but for capital expenditures as well.  Therefore, he requested an outside section in the FY17 budget to include increased enrollment of ELL students as a viable option for submitting a Statement-of-Interest (SOI) to the Massachusetts School Building Authority.  Many school districts in the Metro-West area, Waltham included, are facing unique and significant population increases and don’t have the proper facilities to provide the highest-possible education to these students.

Waltham is qualified for and does receive limited funds from the Federal Title III program but that comes nowhere close to covering the cost of educating ELL students.  Waltham’s income and college achievement levels are above the state requirements for Gateway Communities which are eligible for certain economic development and educational state programs.  Despite Waltham educating some of the highest populations of ELL students (percentage-wise) in the Commonwealth, more than many Gateway Communities, the City is unable to apply for these state programs and grants.

Rep. Stanley filed H.3220, An Act relative to gateway communities, to help raise this issue.  The bill allows any municipality who has experienced a sudden increased in ELL enrollment to be eligible for any education programs and funding reserved for Gateway Communities.